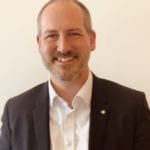 Ben Horner is HR (human resources) Director of Boots UK & ROI having moved from his role as Vice President & Assistant General Counsel in the Boots Legal department at the beginning of November 2020 where he led the Employment, Property, Litigation and Data Protection teams.

Ben is a graduate of the University of Exeter where he read Law and has been a qualified solicitor since 2001. He began his career as an Employment Lawyer at a large law firm in Birmingham before joining Boots in 2004. He has been indirectly connected to Business in the Community (BITC) throughout his time at Boots, has supported a number of initiatives including Ban the Box and is looking forward to playing a more active role in his new position on the Boots Executive team.

Ben is married to Nao, they have four children and live in West Bridgford in Nottingham, close to Ben’s two most favourite sporting venues: the City Ground and Trent Bridge Cricket Ground.

About Business in the Community’s Employment and Skills Leadership Team

The purpose of Business in the Community’s Employment and Skills Leadership Team is to help create a UK where everyone, regardless of their background or experience, can access the education, employment, and skills they need to thrive throughout their working lives.

Find out more about BITC’s work on employment.