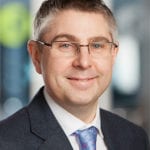 Chris Harrop is Sustainability Director at Marshalls PLC. An accomplished marketer with a proven global track record, Chris’s contribution has ensured that Marshalls is a world-class sustainable business.

He drives the organisation to leverage its United Nations Global Compact signatory status for competitive advantage by working to uphold the principles of human rights, labour rights, environment and governance. Under Chris’s guidance, the business has won numerous awards for commitment to the environment and supply chain ethics, including the Business in the Community (BITC) Responsible Business Awards, and the PLC Awards, an awards open to all companies listed on the main market of the London Stock Exchange, on three occasions.

Chris was Chairman of the United Nations Global Compact UK Network for four years from January 2013  and he has remained a Non-Executive Director of the Ethical Trade Initiative since his appointment in January 2011. In June 2017, Chris became Chairman of Made in Britain.

Chris was rated fifth in Ethical Corporation’s Heroes of Sustainability in 2007 and named a Business Game Changer’ by BITC in 2012. He was named as one of the Top 100 Modern Slavery Business Influencers in 2018.

BITC’s Water Taskforce is a cross sectoral group that convenes to collaborate around shared problems on water and the natural environment. They use action research to address challenging environmental issues that impact across sectors and in partnership with government.

The group has identified that cross cutting themes such as innovative financing mechanisms, digital and skills are integral to overcoming environmental challenges that will achieve positive social change.

The Taskforce supports BITC’s Environment Leadership Team, who are helping business drive innovation that turns the threats of the climate emergency into opportunity for people and nature.