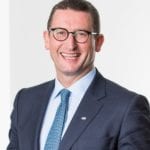 Duncan joined Fujitsu in 2009 to run the private sector organisation within UK and Ireland, and grew that business by 55 per cent. He became CEO of Fujitsu UK&I in 2011 and was a Director for Fujitsu Japan from 2015 to 2019.

Duncan believes being an ethical leader is central to business and its growth strategy. At Fujitsu he was the Executive Lead for Diversity and Inclusion and was committed to eradicating the gender pay gap.

Duncan enjoys building high-performance teams and has a passion for inspiring people to achieve the company’s strategy. He has more than 30 years of global experience in the information and communications technology industry, beginning his career as an apprentice at BAE Systems. As a result, he is passionate about investing in young people and future leaders.

Duncan is a trustee at Business in the Community, and a committed advocate of the Global Goals. He is a fellow of the Royal Society of Arts. Outside work, he enjoys riding motorbikes and keeping physically fit. He is a passionate supporter of Liverpool Football Club.