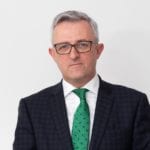 Dean, Faculty of Business, Law and Politics,
University of Hull

Stephen Hardy is currently the Dean of the Faculty of Business, Law and Politics at the University of Hull with over 25 years’ experience in Higher Education. He is a respected Professor of Law and an internationally recognised scholar in employment and social security laws, with 10 monographs and over 400 published articles.

He has previously worked at London, Staffordshire, Salford, Coventry and Manchester universities. He was formerly a Barrister specialising in equality and trade union litigation. He remains an Academic Associate of 33 Bedford Row Chambers in London. Since 2011 he has been a part-time Judge. He is also a Board Member of the UK’s Judicial Pensions Board.

He is a former General Editor of Sweet and Maxwell’s Encyclopaedia in Employment Law and has recently published a guide to UK Social Security Law with Kluwer. Also, he is co-author (with Ryder) of Judicial Leadership (Oxford).

He is a member of the Executive Committee and Honorary Treasurer of the UK’s Society of Legal Scholars. He is also a Board Governor of the International Association of Law Schools and convenor of its Civil Procedure Study Group.