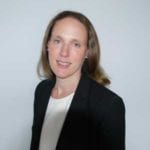 Previous experience includes Head of Cabinet Secretariat, Ministerial private secretary and a four-year secondment to the Scottish Parliament where she established the Public Audit and Finance Committees and was Director of the Holyrood Building Project Team.