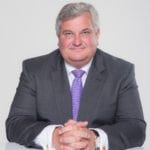 Member of the House of Lords

After reading Archaeology and Ancient History, Mark started his career at the John Lewis partnership as a graduate trainee in 1982 progressing to become Branch Manager in High Wycombe and Cheadle. In 2005 he joined the John Lewis Partnership Board taking on responsibility for strategy and IT as Development Director. In April 2007 he was appointed as Managing Director of Waitrose. At the time Waitrose had 183 stores but had increased to 346 when he retired in 2016 after ten fulfilling years in the role.

In 2013 in addition to his position at Waitrose Mark became Deputy Chairman of the John Lewis Partnership.

He was appointed Commander of the Royal Victorian Order in the 2014 New Year’s Honours for his work with Business in the Community and The Prince’s Countryside Fund. He is also Life Patron of GroceryAid.

In February 2016 Lord Price was appointed the United Kingdom Minister of State for Trade and Investment and was made a life peer.

He left the government in September 2017 to pursue his writing and business interests and remains a member of the House of Lords. To date he has published five books on business, food and for children.