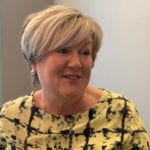 Wendy Warham has ten years of international senior leadership experience for Fujitsu, one of the world’s biggest players in IT service provision.

Recipient of the Financial Times awards for Top 100 Executives 2018 and IT Business Leader and Top 50 Champion of Women in Business 2017, Wendy has been recognised for her work externally, and she is a trailblazer at Fujitsu in developing women business leaders of the future.

Experienced in leading multi-cultural teams of up to 2,000 people, Wendy operates at board level, connects extensively in and out of the business and is happiest when working alongside customers and making a difference.

Wendy’s footprint at Fujitsu includes creating the strategy and programmes needed to transform and innovate, improve profits and impact on the share price. Client-focused to the core, her relationship management skills have been instrumental in securing multi-million-pound global deals and winning critical contract extensions.

Executive Sponsor for the Women’s Business Network, Wendy led the gender pay gap report for Fujitsu, was the key driver of all arising actions and has initiated multiple programmes for women to progress their careers.

Wendy is a member of the diversity and inclusion board for Fujitsu EMEIA, is an experienced mentor and has hosted the Women in Technology event.

During Wendy’s tenure at Fujitsu, more women have been recruited into the organisation, she is working on actions to eradicate the gender pay gap and more than half of the UK P&L is now led by females. Wendy’s work in this area has led to her selection as HERoes Role Model Executive 2019.

Wendy has been a proactive member of the techUK Diversity Council until 2019 where she was a leading force in the Returners Programme.

Wendy has children and grandchildren. She has been a trustee of a charity and her mastermind specialist subject would be rugby.

About Business in the Community’s Global Goals Leadership Team

The purpose of BITC’s Global Goals Leadership Team is to accelerate business progress towards being purpose-driven and deliver on the Global Goals also known as the United Nations Sustainable Development Goals (SDGs).

Find out more about BITC’s work on the Global Goals.