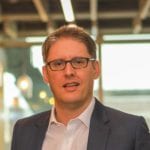 Tony Danker joined the CBI as Director-General in November 2020. His career spans a range of roles in business, media and government.

Before the CBI, Tony was the first CEO of Be the Business, a business-led movement created to transform UK’s productivity founded by a group of FTSE-100 Chairmen and the former Chancellor of the Exchequer, George Osborne. During his three years at the helm, Tony built the organisation from scratch, reaching thousands of firms every month and forming partnerships dozens of leading UK companies.

From 2010-2017, Tony was International Director, then Chief Strategy Officer, at Guardian News & Media (GNM), where he was responsible for expanding the Guardian’s global business, its restructuring plan and digital platform partnerships.

Tony previously spent 10 years at McKinsey & Company (1998-2008) in London and Washington DC, latterly in McKinsey’s global government and education practices as a senior government specialist. Tony then went on to spend two years as a Policy Advisor to the Cabinet Office and HM Treasury from 2008-2010.

Tony holds a Masters in Public Administration from Harvard Kennedy School and a Law Degree from the University of Manchester.