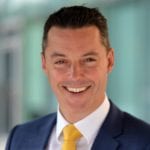 As the Vice President for Operations for London and Southeast England region, Adam Lovelock is responsible for the leadership, management, and strategic direction in the group.

Adam began his Enterprise career via the company’s management training programme. He joined Enterprise in 2002 as a Management Trainee in Chatham, Kent.  Within a year he was promoted to Branch Manager. After three years with the company, he was promoted to Area Manager in Essex.  Adam also ran all London airports as an Area Manager and helped oversee the relocation of Enterprise’s flagship location at Heathrow airport.

Adam has held various senior positions, as Group Rental Manager for the East of England and then the South East region.  Most recently, Adam was the Assistant Vice President/Sales Director for the UK and Ireland Insurance Sales Division.