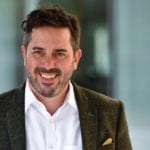 As Vice President and General Manager for the Southwest Group, Brian Swallow oversees all aspects of the Enterprise business throughout the region, which comprises more than 80 daily rental branches, five sizeable Flex-E-Rent depots and in excess of 20,000 vehicles.

In his nearly 20 years with Enterprise, Brian has made a significant contribution to the company’s development, both in the US and internationally, and now serves as one of the most senior officers in the UK.

Brian joined Enterprise as a Management Trainee in Long Island, New York in 2001. He held various positions before moving to work for Enterprise in the UK in 2007.  He has since worked in roles in their European Head Office and in the Southeast Group. In June 2020, Brian was promoted to his current position to lead the Southwest Group.

Brian served on the BVRLA (the UK trade body for companies engaged in vehicle rental, leasing and fleet management) rental committee for five years, two as chairman and one as assistant chairman. A keen supporter of diversity and inclusion in business he chaired Enterprise’s Southeast group Diversity Committee for three years and has actively supported local charitable causes. He led the Southeast group’s Children in Need activities last year, raising more than £70,000.

Brian will be relocating to Cheltenham in 2021 with his wife, Chantelle and their three children (Sadie, Camden and Hadley).