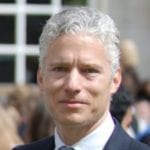 Drake joined Business in the Community as Chief Operating Officer in February 2019.

Much of Drake’s career has been spent in financial service straddling New York and London (where he has been based since 1992).  He has held senior roles in asset management (most recently as COO of Neuberger Berman’s Europe, Middle East and Latin America activities) and capital markets (including 15 years with JPMorgan Chase, where Drake led the firm’s Structured Capital Markets business in Europe).

For more than 20 years Drake has also been active in philanthropic roles, predominantly focused on education and accessibility. Since 2016 he has served as a Commissioner of the US-UK Fulbright Commission and he is a founding Trustee of the UK Friends of Georgetown University.  Drake has previously served as Chair of his local residents’ association and has served his alma mater in a variety of board roles, including six years on Georgetown’s Board of Regents where he was Chair of the Global Engagement Committee.

Outside of the office, Drake enjoys adventurous travel with his family (he and his wife have two sons who attend university in the UK).  He is also a passionate skier and is fond of any game involving a racket.