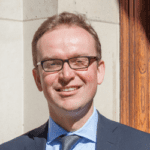 Jeremy Pocklington is Acting Permanent Secretary at the Ministry of Housing, Communities and Local Government, where he was previously Director General for Housing and Building Safety. Immediately prior to this he was Director General for Markets and Infrastructure at BEIS, following a previous senior position as Director of the Enterprise and Growth Unit at HM Treasury. Jeremy joined the Treasury in 1997 and has held posts on financial regulation, tax and fiscal policy as well as working as an assistant private secretary to two Chief Secretaries.

Jeremy is a trustee of Business in the Community, and a Non-Executive Director of Local Partnerships which provides commercial advice to the public sector. He has an MBA from INSEAD and an MPhil and MA in history from Oxford.