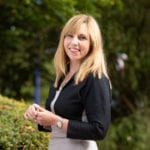 Joanna joined Shakespeare Martineau in September 2019 as a real estate partner specialising in large scale strategic development projects. Joanna has spent her career living and working in the West Midlands, joining Eversheds in Birmingham in 2003, and Wright Hassall in Warwickshire in 2017.

Outside of work, Joanna is a co-opted governor at Oak Cottage Primary School, and in her spare time enjoys running and spending time with her family.

As a member of Business in the Community’s (BITC) West Midlands Board, Joanna hopes to be able to give back to a region where she has spent the majority of her working life, bringing greater diversity to the regions businesses and equality of opportunity for all in the region.