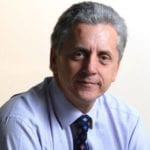 Mike Blackburn lives in the North West and spent his 36-year career in the private sector, always working for technology companies.

He spent 25 years working for BT. When he left in January 2018, he was both Chair of BT’s North West Regional Board, and also Head of Digital Government in the UK.

Mike has a portfolio of non-executive roles including Chair of the Greater Manchester Local Enterprise Partnership. This board empowers business leaders to work with the public sector and jointly set the strategic course, determine local economic priorities and drive growth and job creation within the city region.

Mike’s other non-executive or trustee roles are:

In June 2015, Mike was made an OBE in the Queen’s Birthday Honours List for services to the economy in the north west.  Mike sits on the North West Leadership Board for the Prince of Wales charity, Business in the Community, and was selected as the Prince’s NW Regional Ambassador for 2010/11 and 2011/12.

Mike is married with three children and lives in Cheshire.