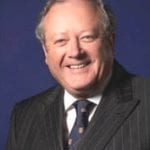 Paul Griffith, Chair of The Monastery Manchester, was born in Manchester in 1953 and educated at the school of St Francis in Gorton, East Manchester. Paul has had an extensive 40-year career in the food industry including senior roles with retailers ASDA and The Co-operative.

Previously Chief Executive Officer with Interlink Foods PLC and a former Chairman of the influential Provision Trade Federation, Paul has held general management, commercial and marketing roles with leading retailers and food manufacturers in UK and Europe. He has also headhunted at chair and board level for public and privately held companies. His portfolio roles have included working as an international management consultant and as an adviser on hospitality and event management within heritage assets.

Paul is a Deputy Lieutenant of Greater Manchester and his voluntary activity includes chairmanship of a charity, The Monastery of St Francis & Gorton Trust in Manchester and its trading subsidiary The Monastery, Manchester. For 16 years he has been a judge of the Edinburgh-based International Indian Chef of the Year Competition, with proceeds supporting Bangladeshi orphans.

A fellow of the RSA and a member of The Royal Society of Saint George, Paul was appointed a Deputy Lieutenant in 2004. His hobbies include piloting helicopters.