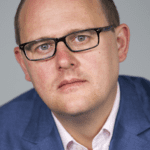 Over the past five years Paul has led on a number of key policy areas including public services, transport and industrial policy. As well as responsibility for the TUC’s organisation in Wales and the English regions, annual Congress, union organising and inter-union relations, he formally deputises for TUC General Secretary Frances O’Grady.

Paul was one of the first intake of the TUC’s ‘Organising Academy’ in 1998 – and prior to this had been an active member of unions including the GMB, UNISON and CWU, working as a hotel night porter, in a call-centre and working on a local bus help-line. He first joined a union working in ASDA at the age of 17.

Paul has also served as the TUC’s regional secretary in the North-East and Cumbria and as the TUC’s national organiser, where he had responsibility for developing the TUC’s Organising Academy and supporting union efforts to reach out to the next generation of union members and activists.

Paul was appointed a member of the ACAS Council in November 2011. He is a trustee of the T.U.U.T Charitable Trust and a member of both the government’s Strategic Trade Advisory Group and Green Jobs Taskforce.

Paul is married to Vicky, has three grown-up children, and lives on Merseyside. He supports Everton FC.