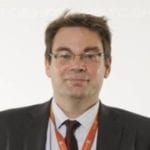 Steve Hargreaves joined the energy industry in 1987 as a graduate trainee with the Central Electricity Generation Board.

Steve joined Seeboard PLC in 1989 as the electricity industry was privatised. He remained until its acquisition by EDF in 2002.

Steve has fulfilled a diverse set of roles over his career including energy risk management, power station project development, and leadership roles in the Customers Business.

For the past ten years Steve has acted as Strategy and Energy System Economics Director, and played a key role in leading EDF’s input into the UK electricity market reform programme, and in developing the economic case for a low carbon diverse power system combining renewables, nuclear and flexible generation.

Steve has been involved in EDF’s efforts on climate change since 2006 and was keen to join Business in the Community’s Net Zero Carbon Taskforce to help businesses take action that will have a meaningful impact on greenhouse gas emissions.