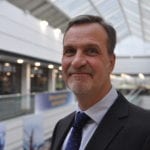 Tim Freeman is the Deputy Managing Director at Toyota Motor Manufacturing (UK) Ltd, responsible for the Engine Plant at Deeside, Flintshire, and Corporate and Production Control at both Toyota UK Plants.

Tim joined Toyota as a Production Manager in 2003, and progressed to General Manager of the Press & Weld Division in 2008. From 2011, he worked in human resources as General Manager within Corporate Operations.

Tim returned to manufacturing in January 2013 as Director of Production Operations responsible for vehicle manufacturing areas, and took a dual assignment in 2014 with additional responsibility for quality assurance, facilities and environment, and vehicle projects.

In January 2017, he started his first international assignment as Production Vice President at Toyota, Peugeot, Citroen Automobile in the Czech Republic, and completed two-and-a-half years in that position. He returned to Toyota Manufacturing UK in July 2019 to take up the role of Production Support Director, in Burnaston.

Throughout his career, Tim has worked predominantly within the automotive industry, having experience in the supply, transmissions and vehicle manufacturing areas. Tim started his career as a Technician Apprentice at Mirrlees Blackstones, part of the Hawker Sidley Group. After graduating from Nottingham Trent University with a double honours degree in engineering and business studies, he worked as a Manufacturing Engineer and Cell Manager for Lucas Industries. Before joining Toyota, Tim worked as a Production Manager for Land Rover at the Solihull Plant.

Tim is married with two sons.