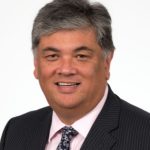 Simon Tse first joined the Civil Service in 2008, as Chief Executive Officer for the Driver and Vehicle Licensing Agency. This was followed by a Director role in DWP before joining CCS in May 2016. Simon previously had a successful 25 year career in the private sector, including a role in Virgin Media.

Without hesitation Simon took on the role of Cabinet Office Race Champion in November 2019.  Simon was the first person from an ethnic minority to fill the role, which makes the appointment even more poignant for him.

He was born in Swansea back in the early 1960s to a Welsh mother and a father born in Hong Kong, and he was brought up on his mother’s side of the family. Other than his siblings, there was only one other non-white child at his primary school. As a result, Simon often felt conflicted, like he didn’t fit in – asking if he was Welsh, British, Asian, or mixed race? In truth he was all of these, but it has taken him many years to reconcile this and feel comfortable about it.

Since taking on the CO Race Champion role, Simon has been working with John Manzoni and the CO HR D&I team to develop and roll out “Let’s talk about race” sessions across the department. He is collaborating with Cabinet Office staff networks on an event to mark the International Day for the Elimination of Racial Discrimination. He is also working closely with multiple stakeholders to develop a strategy for his ambitions as Cabinet Office Race Champion.

About Business in the Community’s Race Equality Leadership Team