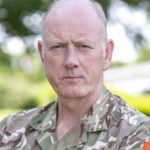 Head of Diversity and Inclusion

Christopher Coles spent 34 years as an Army Officer and completed his ‘regular’ service in March 2021 leading the delivery of people services globally. Away from his more recent immersion in military HR, his army roots are in tanks and armour.

His service took him, like most of his generation, to Cyprus, Bosnia, Kosovo, Iraq and Afghanistan, and he was based for most of his career in Germany. He had the great good fortune to command at several levels in the army including during operational service in Kosovo and Iraq.

He now serves as the lead for diversity and inclusion for the British Army, an appointment he assumed in June 2021.

He is delighted to join the Leadership Team both to learn from others’ collective experience and wisdom and to push towards the benefits which true inclusion brings to any organisation. He believes with conviction that respect for others is a pretty good place to start.

Christopher is married with two grown-up children and spends his spare time fishing and being walked by his army veteran dog, Rocket. He has also been involved in helping to run a number of charities.