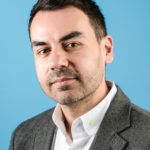 Head of People and Culture

Christos Tsaprounis is a people and culture leader with a career across different industries ranging from digital to social housing. He spent four years at the Co-operative Bank before joining Auto Trader in 2014 where together with his brilliant team he focuses on creating a space where everyone’s uniqueness is celebrated and is empowered to thrive by being their authentic, true and best self. Driven by his passion for inclusion, he leads the Diversity and Inclusion and Environmental, Social and Governance strategies of one of the most admired digital businesses in the UK and Top 50 Inclusive Companies.

He was born in Athens and moved to the UK in 2002 to study for his MSc in Human Resources at The University of Manchester. Prior to this, he completed studies at the American College of Greece and the London School of Economics. Christos fell in love with Manchester, and its people, so he decided to make it his home.

Christos is actively involved in making a difference by working with leading charities. He is a Trustee for Survivors Manchester and is partnering with Forever Manchester and the Carbon Literacy Trust. He joined the Business in the Community North West Leadership board in 2021. Christos joined to support the region’s opportunities for collaboration across businesses and community organisations to tackle issues, encourage innovation and ultimately make a difference to people’s lives.

Recognised for his contribution to his industry, he is a Fellow of the Chartered Institute of Personnel and Development and the recipient of the Lifetime Achievement Impact Award by the Recruiter Magazine in 2018.