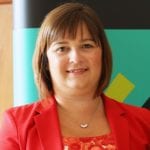 Emma Watkins is Director of the CBI in Wales, a post she has held since January 2012.  In this role she is responsible for managing the CBI’s relationships with the Welsh Government and other stakeholders, acting as the figurehead for the CBI in Wales. She is responsible for member recruitment and retention, as well as the commercial events programme. She is also leading the CBI’s work on gender diversity across its membership, on which she works directly with the CBI Director General.

Emma has been with the CBI since 2003, during which time she has been Head of Public Services Policy, Principal Policy Adviser in the CBI’s Brussels office, and Head of Policy for the CBI in Wales.  Prior to the CBI, Emma worked as a political researcher for two different assembly members in the National Assembly for Wales, during its first four years. Originally from St Davids, Pembrokeshire, Emma holds an MSc Econ in the European policy process, and a BSc Econ degree in politics and modern history, both of which are from Cardiff University.