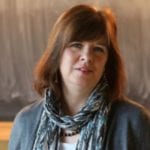 A child of Business in the Community, Lesley joined in 1987 and is the only member of staff to have worked for all four chief executives of the charity.

Lesley graduated from the University of Exeter in 1987 and joined Stephen O’Brien’s team, quickly picking up the reins of running the chief executive’s office. She qualified as a Chartered Secretary in 1999 and became a Fellow of the Institute of Chartered Secretaries and Administrators in 2016. As Company Secretary and Head of Facilities, Lesley has worked on projects across BITC, most notably managing the move of the London office out of Baker Street to Shepherdess Walk in 2000, the setting up of the separate charity, The Prince’s Countryside Fund in 2010, and more recently the merger of Scottish Business in the Community into BITC.

Lesley was recognised in the Queen’s Birthday Honours List 2017, being awarded an LVO for 30 years’ service to the Prince’s Charities.