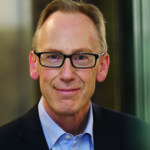 Mark has spent much of his professional career in the retail sector including senior Finance and Commercial roles with Marks and Spencer plc working in both their UK and overseas businesses.

He joined The Southern Co-operative in 2005 as Chief Financial Officer, and was promoted to become Chief Executive in October 2008.

The Southern Co-operative is an independent regional business owned by its customer and colleague members. It employs 4,500 people primarily in 250 trading outlets across the South of England. Turnover is £0.4bn per annum.

Mark is a fellow of the Chartered Association of Certified Accountants and a member of the Institute of Directors. He was Chairman of The Portsmouth Cultural Trust from 2011-2017 and is a former Director of Portsmouth and South East Hampshire Chamber of Commerce.