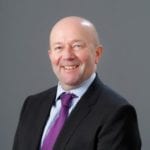 Peter Perry was appointed Chief Executive Officer of Dŵr Cymru Welsh Water in April 2020, after roles including Managing Director and Chief Operating Officer. Appointed Operations Director of Welsh Water in July 2006, Peter has a civil engineering background and was formerly the Chief Operating Officer for United Utilities Operational Services (UUOS), having previously been the Operations Director for UUOS with responsibility for the operational contract with Welsh Water and UUOS’s water interests in Scotland and Ireland. Prior to joining UUOS he worked for Welsh Water for over 20 years.

Dŵr Cymru Welsh Water is the only not for profit water company in England and Wales, supplying most of Wales and some adjoining parts of England with water and sewerage services. It is a long-standing member of Business in the Community, and recently announced its 30-year vision and plan, ‘Welsh Water 2050’ to embed responsible practices across organisational strategy.