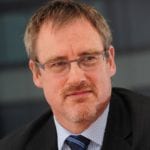 Richard Hawes is a Deloitte partner based in Bristol and leads the firm’s restructuring teams in the South West and South Wales.

He advises corporates facing financial stress and their stakeholders. He also is Global Lead of Deloitte’s Managed Exit services proposition, which supports large corporates on how to deal with underperforming and non-core parts of this business.

Richard also leads Deloitte’s work in the South West supporting local charities as part of the firm’s One Million Futures initiative. This includes Bristol-based 1625 Independent People, which supports young, homeless individuals with a variety of programmes. Richard hopes that his involvement with Business in the Community should help maximise the support that Deloitte can give to community support initiatives.

Outside of work, Richard was forced to become a cyclist when he signed up to the Deloitte Ride Across Britain (Land’s End to John O’Groats) in 2012 to support the Paralympics. He is also still trying to keep music as an alternative career option as he drums in a Chepstow band.