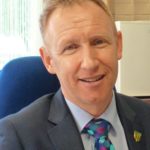 Phil Gaiter is the Rector of The Gordon Schools in Huntly, Aberdeenshire, Scotland. He has been the Head Teacher at the school for six years, having previously been a Depute Rector.

Phil’s career began as a Modern Studies Teacher in Aberdeen City in 1993. Since then he has worked in three Aberdeenshire schools as a Principal Teacher, Faculty Head and Depute before moving to Huntly in 2015.

Before teaching, Phil studied at Loughborough University and Stockholm University (he still speaks Swedish!). He has devoted much of his time to voluntary work with adults and children with severe and complex learning needs. He is also a former youth international hockey coach and player.

Phil joined Business in the Community’s (BITC) Education Taskforce after his school in Huntly benefitted from a BITC partnership. The benefits of this partnership for vulnerable young people became clear. He is committed to the equity agenda and really wants to remove barriers to learning and career progression for disadvantaged learners in communities. He wants the taskforce to continue challenging businesses to provide opportunities for all, and learn from practice across all four corners of the United Kingdom.