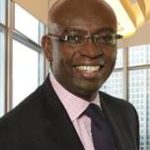 Richard is a Partner and Vice-Chair at KPMG in the UK specialising in taxation in the Financial Services Sector. Richard joined KPMG in 2000 and has been a partner since 2004.

Prior to that he worked as a solicitor in the Tax Department at Simmons & Simmons (the City law firm) and as a VAT specialist with Deloitte, Ernst & Young and also worked for HM Customs & Excise (as it was then called).  Richard also practised as a barrister in Nigeria for a couple of years before moving to the United Kingdom.

Richard supports financial institutions with the day-to-day intricacies of their indirect tax affairs including advising on transactions, VAT recovery and understanding the boundaries of the VAT legislation which sometimes includes challenging HMRC’s interpretation of the law.  Richard is well known on the conference circuit and has written numerous articles.

Richard is the partner sponsor for KPMG’s African Caribbean network.  This role gives Richard an opportunity to support and mentor colleagues with an Afro-Caribbean background. It also gives him an opportunity to positively engage, shape and drive KPMG’s diversity and inclusion strategy.