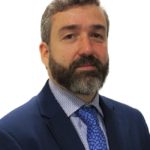 Paco Hevia has been part of the Ferrovial Group of companies since 2001, working in the waste sector both in Spain and the UK, including Operations Director for the north Madrid region between 2006 and 2008.

He is overseeing existing waste treatment. Paco is Managing Director at Amey Waste Treatment since October of 2018, MEng in chemical engineering from the Polytechnic University of Madrid.

He started his career in the waste sector 20 years ago, working for Ferrovial where he held several managerial positions in charge of waste treatment assets mainly around Madrid. He has worked for Amey in the UK since 2008 in business development, bidding and operations. He has participated in the design, building and commissioning of recycling plants and EfW facilities including Amey’s Allerton Waste Recovery Park and the gasification plant in Milton Keynes.

He oversees waste recycling and recovery operations in the UK, managing in excess of a million tonnes of household waste for Amey customers in North Yorskshire, Northamptonshire, Milton Keynes, the Isle of Wight and Cambridgeshire where Amey has established a localised closed loop solution for plastic packaging with local manufacturers Charpak and the RECAP partnership.

About Business in the Community’s Circular Economy Taskforce

The Taskforce supports BITC’s Environment Leadership Team, who are helping business drive innovation that turns the threats of the climate emergency into opportunity for people and nature.