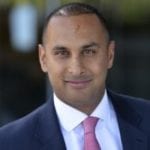 As Vice President/General Manager of Enterprise Rent-A-Car for the North East of England, Sak Gill is responsible for the growth and success of more than 50 rental locations.

Sak has been with the company for nearly 18 years and has played a pivotal role in driving the business forward and enhancing customer experience across the UK and Ireland.

Soon after he graduated with a bachelor of arts in accounting from the University of Central Lancashire, he began his career as a Management Trainee at a rental branch in Stoke-on-Trent. In 2008, he was promoted to Group Rental Manager of Central London, and three years later he took on the role of Group Rental Manager of the West Midlands. In 2015, Sak was promoted to Assistant Vice President of Rental and helped the UK and Ireland teams achieve record profit as well as their highest ever customer service ranking.

In 2017, Sak was promoted to his current role of Vice President/General Manager, where he now oversees business growth in north-east England.

As a passionate advocate of diversity in business, Sak supports diversity and inclusion events across the UK. He is a proud role model for many ethnic minorities starting their Enterprise journey in the same way he did – on the company’s management training programme.

Sak chairs Enterprise’s national Diversity Committee for the UK and Ireland and has established a mentor programme with the North Division leadership team at Priesthorpe School.

He lives in Harrogate with his wife, Joss, and their daughter, Maizey.

Find out more about BITC’s work on race.